This started most as a curious thing and now I realize it went crazy. But I learned a lot so perhaps other may benefit of it.

On my quest to control all LEGO MINDSTORMS models ever sold from a single “gateway” I started a few weeks ago my work with the Spybotics: 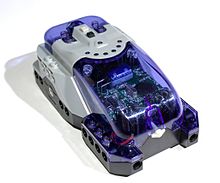 This little fellow has 2 motors and a touch sensor inside, can talk IR and also reacts to VLL. So it’s kind of a Micro Scout on steroids. And, with a little of good will, we can call it the ancestor of the LEGO BOOST, among the Cybermaster.

The Spybotics was programmed with a serial-to-optical cable. I still don’t have one so I tried to program it with a RCX USB IR Tower using NQC (there are some reports that the USB version of the IR Tower can “speak” at 38 and 76 kHz and the later is needed for the Spybotics). But no success yet.

The Spybotics also reacts to a IR Remote Control:

The protocol allows 3 different channels and it’s also possible to send commands to all 3 channels simultaneouslys so I decided to get more information about the protocol.

Turns out that this IR protocol was implemented by LEGO a few years before the Power Functions IR protocol but it never gained momentum and it was quickly abandoned. But a few interesting systems used this protocol:

The last one surprised me as I have two of these, after a very lucky finding 4 years ago on our summer holidays – our kids love them and we use them at our LUG events with great success among young visitors:

So I picked up my Manas, Spybotics and DUPLO commands… and yes, they are interchangeable!

It would be great if I could control my kids DUPLO Dozer from the computer, side-by-side with the Spybotics and the Manas.

The best I could find were references to a Rob Doucette document where he gathered info collected from several Lugnet posts (mainly contributed by John Barnes). One of those references is Philo’s site, where he shows how he used is RCX to control the RC Nitro Flash).

but thanks to the Internet Archive Wayback Machine I managed to retrieve the document from a May 2008 snapshot.

The low level details are resumed in 2 sentences:

“The transmitters transmit short messages of two bytes encoded as 8 bit + odd parity. The transmissions use 76kHz modulated IR at a baud rate of 4800, 25% duty cycle.”

Orange and Yellow can be 0/7/8/F (no button, forward button, reverse button and stop or immediate off)

The space between each message is different according to the channel used (simillar to PF IR protocol):

I tried to replicate the commands with an Arduino and an IR LED but all my attempts failed miserably. After getting tired of it, I decided to analyze the signal, but since I don’t own a scope or a logic analyzer I had to use the only tools I have: an Arduino, a Raspberry Pi, a laptop and Google.

So to “sniff” the IR signal I used an Arduino Uno with a TSOP4856 as an IR decoder and a IR LED for testing my signals back. The setup is pretty much the same as this Adafruit lession:

The TSOP module has a filter better suited for 56 kHz carrier – not quite the 76 kHz I wanted but it was the higher carrier I could found – just for the record, an IR photodiode and a 1M resistor also works, both devices can detect the 76 kHz signal at short distances.

So I installed cyborg5’s IRLib2 Arduino library on my laptop and tried the rawRecv sketch available on the examples folder. Pressing the Yellow Forward button on the Manas command I got this:

So I passed those last lines into the rawSend sketch and changed the carrier frequency to 76:

… and each time I sent a key to the Arduino serial terminal my Manas yellow motor rotated forward.

I tried to find some meaning to those values but I was totally lost. Tried to use another skech (Analyze) but the results made no sense… I captured all keys combinations and they worked but I wanted to know the meaning.

So I used the same TSOP4856 on my Raspberry Pi and installed LIRC, so I can use “mode2” command to record a signal. Recent stretch-based versions of Raspbian have some quirks but following this method I had success.

I installed IrScrutinizer on my laptop, imported the above result (“Import signal”) and got a nice signal in the “Scrutinize signal” pane:

A zoom of the first block from the left shows a clear sign:

But how does this relates to “50 74” that, according to the protocol definition, is the 2-byte representation for “Yellow Forward on Channel #1”?

Well, after a few head aches, I got it.

First, I realize that I made a stupid beginner error: like many serial codes, the bits are sent in revere order (least significant bit of each byte first, more significant bit last).

Then I understood the rawRecv format: each value represents the time duration of a continuous mark or space before it “toggles”.

I also got confused with the bits representation (that 25% duty cycle still confuses me). But if I assume a single bit duration to be near 208 µs (for a 4800 bit per second rate), ‘zero’ as the start bit and ‘one’ as the stop bit  I can translate this:

The last value (1000 µs) is an arbitrary value used by the sketch author to end the signal.

The odd parity bits are correct, that’s a good start.

Reverting the order of the data bits, we have:

So the precision isn’t pretty (I got bits with just 154 µs and others with 238 µs when they all should be 208 µs long) but that doesn’t really matter – I can now recreate all signals with theory-perfect values and test if it works.

So I wrote a python script to generate all combinations for all channels and also a RemoteControl sketch –  just an extended ‘rawSend’ sketch that sends different signals according to the keys received from the serial port.

This is a sample of the output of my python script:

The serial port can be used directly so we can use our keyboard (in linux, just use screen to connect to the Arduino serial port, i.e. ‘screen /dev/ttyACM0′) or we can write our own programs to automate it.

And yes, we can connect the Arduino to our MINDSTORMS EV3 and use ev3dev to control our old LEGO IR devices 🙂

I created a github project for this, you can get the LIRC configuration (or just the generator there).